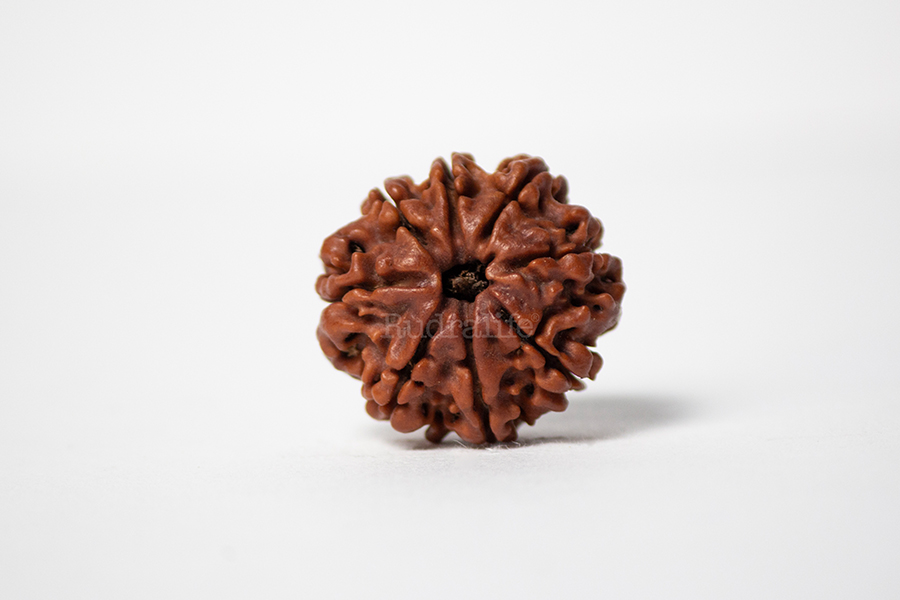 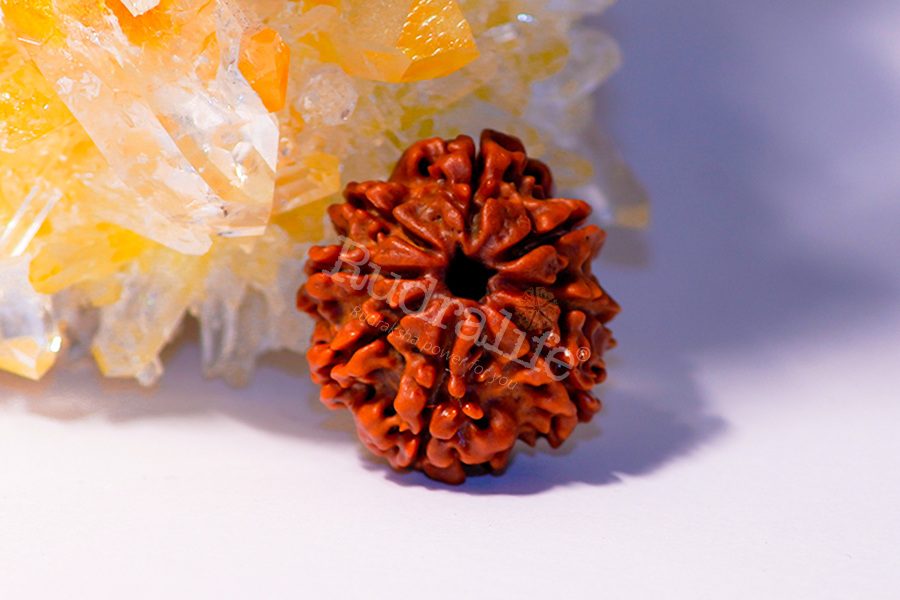 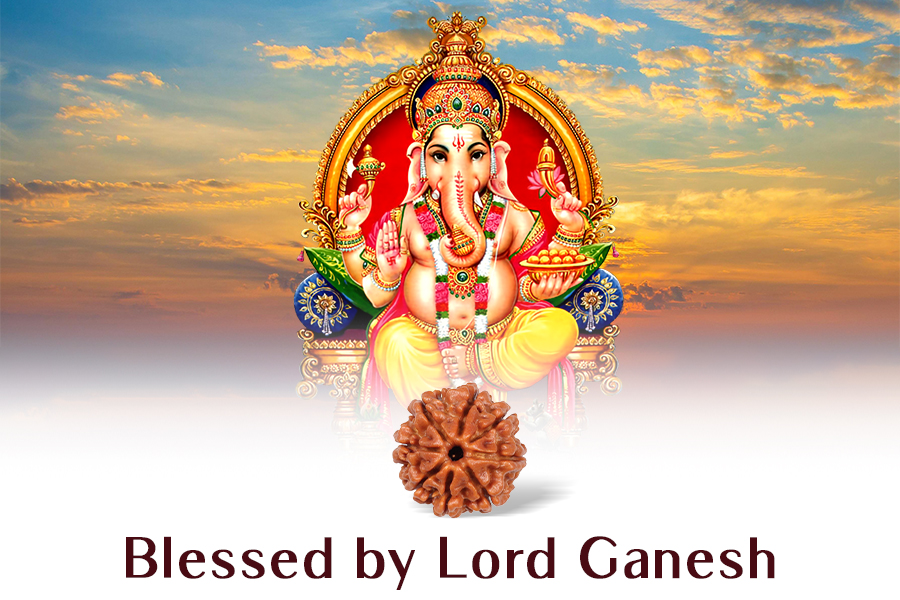 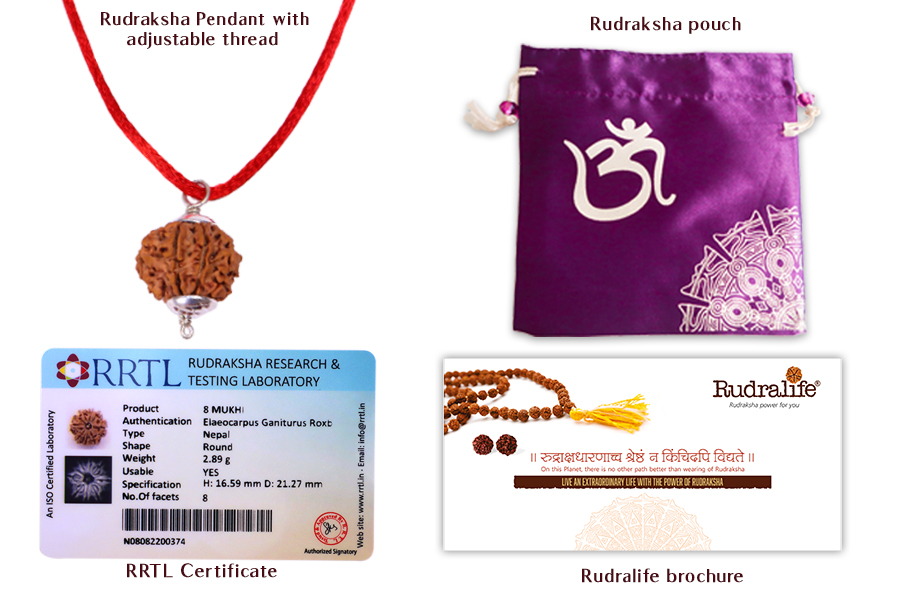 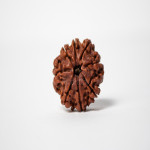 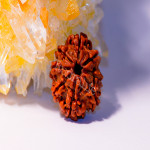 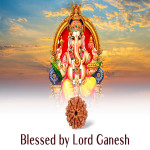 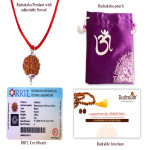 BENEFITS: For removing obstacles and hurdles and good for career growth. For back pain, body pain, kidney and liver ailments.

8 Mukhi Rudraksha is Lord Ganesh (Vinayak). All sins of the wearer get absolved and obstacles removed.

The 8 Mukhi Rudraksha is graced by Lord Ganesh. He is the Pratham Pujya, the deity who is always invoked first before undertaking any kind of work. His presence is known to bestow intellect with wisdom, stability and removal of hindrances. Where Lord Ganesha is present all obstacles fall away. As per texts like Shrimad Devi Bhagwatam and Padma Purana Lord Karthikeya also blesses the 8 Mukhi Rudraksha. The Rudraksha Jabalo Upanishad mentions that the eight Vasus, eight divine mother Goddesses and Mother Ganga (the sacred river known for washing away sins) also bless this bead. The Shri Rudram a hymn that describes the magnificence of Lord Shiva opens with a prayer to Lord Ganesha first.

Benefits of wearing the 8 Mukhi Rudraksha :

Who should wear the Eight Mukhi Rudraksha:

The 8 Mukhi Rudraksha bestows the wearer with an analytical mind. This in turn leads to better comprehension and understanding. Sins accrued by compulsive lying get condoned when a person wears an 8 Mukhi. The 8 Mukhi Rudraksha serves as a magnet for drawing fame, artistic excellence and prosperity. This Rudraksha is known to control the malefic effects of Rahu. The planet Rahu is known for his mastery in illusion and occult thereby causing major confusion. Confusion leads to delay and lack of appropriate solutions. The 8 Mukhi Rudraksha breaks this pattern for the wearer thereby blessing him with keen intellect to overcome obstacles.

The 8 Mukhi Rudraksha is a sacred talisman that bestows focus and grounding. This in turn draws endeavours that give fortunate outcomes. Scriptures state that higher levels of Riddhi and Siddhi become accessible to the wearer. If human life is a sacred map then chalking an obstacle free path is done only by the blessings of Lord Ganesh. Wear the 8 Mukhi Rudraksha to experience this on a journey that is divinely guided for favourable outcomes.

Once there was an Asura named Analasura who was the son of Yama. He could burn or scorch anything with the fire emitting from his eyes. He decided to turn his fiery vision towards the Rishis who were performing Yagna and offering oblation to Devatas and deities. He wreaked havoc burning down ashrams and destroying the Havankunds. The Devatas tried to stop him but could not. When Lord Ganesha came to know of this he rushed to the ashram and swallowed Analasura in one gulp. There ended the distress caused to the pure and pious. All worship and rituals could now take place in an obstacle free manner. It is also stated that when the ministers of Bhandasura set up devious Yantras to subdue the power of Shaktis Lord Ganesha appeared as Shakti Ganesh and shattered these Yantras with his tusks breaking them to pieces. Thus it is seen that Lord Ganesh always rushes to help those distressed by obstacles.